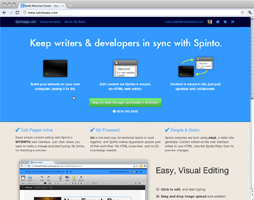 Web editors and programmers use Spinto to build websites together. Editors change websites visually, and their changes are saved in Git for programmers.

When you learn the basic tools of the web (HTML, CSS, JavaScript), a really neat world is suddenly at your disposal. You can craft beautiful, inspiring, and engaging experiences then share them with the world. You can FTP some files to a server and whammo, you made some web!

But sooner than you think, you need something HTML, CSS, and JavaScript can’t help you with. You need to collaborate. Because sharing and working together, that’s what makes the Internet great. It’s just plain natural to us humans. The moment we can do something, bam, we want to do it together.

A few decades later than we might have hoped, it looks like we’ve found a pretty great tool for collaboration. It’s called Git, and it is everywhere now. If you work with any kind of code and don’t know what Git is today, you will soon. Sooner than you think.

There is a small snafu though. Git is a little, er, intimidating. For people who aren’t familiar with coding or the tools of the web, Git is going to be out of reach.

Tim Berners-Lee famously created HTML, the cornerstone (one of the big ones) of the Web. But the fact that we write and read HTML as code is a mistake. Tim was a smart guy (and still is!). He knew writing code is hard, and not everyone is going to do it. So HTML was designed as a visually editable language.

Visual editors are just plain hard. A few decades later than we might have hoped, it looks like we might be getting back to editing the web in a visual way. Browsers are giving us new tools for making webpages editable with a click. It’s not perfect, yet. It’s getting better.

Spinto brings non-programmers into the Git work-flow with a visual editor. Content editors and programmers stay in sync, in a way that a traditional CMS really can’t match. Some examples of why this gets me excited:

Spinto’s public beta is the proving ground for this idea, the idea that building the web should be radically simple for source code hackers and content editors. There are tradeoffs involved when you aim for radical, and there are many situations where Spinto will not be the right tool. But I hope where you do use it, you and your team have some of the most fun building websites you’ve had in a while.

Build something with the Spinto beta: www.spintoapp.com

And send me your feedback, thoughts, and troubles at matt@spintoapp.com.

Now, get out there and make some more web!

Some conversation at Hacker News