This week Vestorly, a client of my consulting partnership 201 Created, is sharing Torii.

Torii is a set of abstractions for handling authentication and session management in Ember.js applications. The name comes from a traditional Japanese gate whose design you likely recognize:

Let’s discuss how we build authentication for single page applications, and how we can build it better.

People prefer the tools they know. Authentication can be a non-trivial challenge for any app, so most developers have tools and techniques they trust for building traditional (page-by-page) auth flows. When building a single page app, it is not surprising that they reach for those same server-side authentication solutions.

But those solutions fit poorly.

We want to see more applications expose authorization and authentication as first-class concepts via the API. In the case of authentication, especially when a user could sign in via any of several services, we’ve found “authorization objects” useful. These provide a first-class model that can be passed to other APIs, and simplify the client-side logic and error handling requirements.

Javascript applications can implement a clean, simple user experience for OAuth2 in the browser, one without user redirects or acrobatics to keep track of state.

Raise your hand if you’ve worked on a single page application (whatever the framework or anti-framework) that had an authentication flow like this: 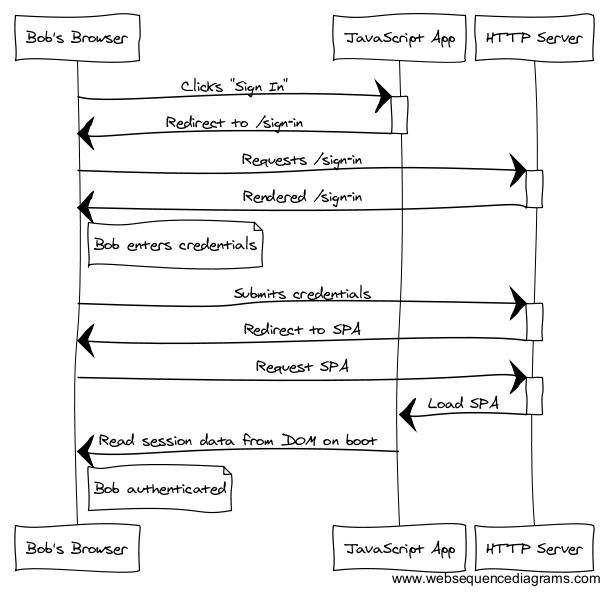 This authentication system lives outside the JavaScript application entirely. The user-experience is choppy and slow, and the code difficult to maintain.

To improve this, make authentication a first-class part of your API and JavaScript application: 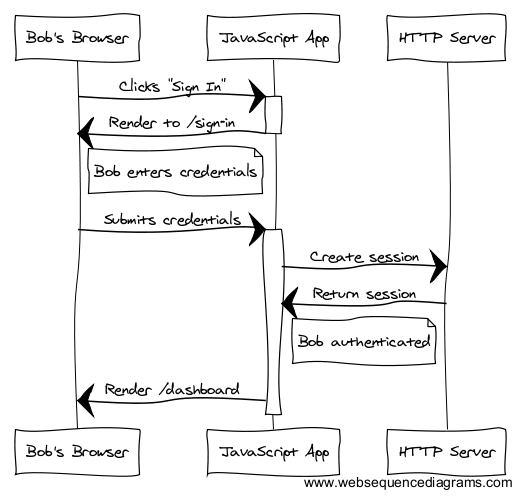 “Its OK @mixonic,” you may tweet, “we have a /session endpoint that accepts POST to create a session. We’re way ahead of you!”

Simple. If your application only supports username/password access, this may be sufficient. Let’s add support for social login:

Uh oh. This has gotten messy.

There is one endpoint, /oauth2/facebookHandler, that is not part of the API proper. It is not in the /api namespace, and it doesn’t response like an API endpoint. Instead it uses redirects and rendering data into the page to push state into the browser.

The session logic has changed in two ways: First, we’re forced to use cookies for authentication, which adds overhead to all requests and is a less portable way to authorize requests. Second, the logic for creating a session is in two places.

The crafty developer might say “Ahha! I can create an API endpoint for handling the Facebook OAuth2 code, and signing in! It could be the same endpoint even! Thus I can avoid the overhead and complexity of middleware!”

Most OAuth2 flows are flexible enough to have all their user-interactive portions implemented in JavaScript. Facebook Connect is a good example of this. The crafty developer is crafty indeed.

Let’s see what she came up with:

This is where most apps end up. They meander into building a session API that is more like an RPC request than RESTful action. The inputs are inconsistent, the endpoint has the responsibility to do a large number of things (OAuth2 verification, username/password verification), and the possible error states are numerous.

But there is a way out.

If the concept of “session” is cluttered, then the API is lacking. It fails to express “session” in a composable manner. By extracting a new domain object from the API, “session” can be repaired.

Let’s try an approach that separates authorization from session creation:

The concerns of OAuth2 authorization and session creation are isolated. As a bonus, we have a social authorization object that can be passed not only to the session API, but also to other APIs. Consider the common scenario where an existing user wants to link his or her account to social accounts in order to make logins easier, or to enable some integration with their social networks:

Note that the new endpoint accepts the social authorization object. The JavaScript client can take advantage of composability to combine these endpoints in novel ways. Handling errors at any single step of a complex interaction is trivial.

“But the crafty developer!” I hear you cry, “How was she handling OAuth2 without server-side redirects?!”

A redirect endpoint (as in v2 of the API above) is not the ideal way to handle authorization for a couple of reasons:

Thankfully, a popup can encapsulate OAuth exchanges without reloading the JavaScript application. OAuth2 can be consumed without a server-side redirect handler, and though OAuth 1.0 would requires a handler we can slim down its responsiblities and complexity. 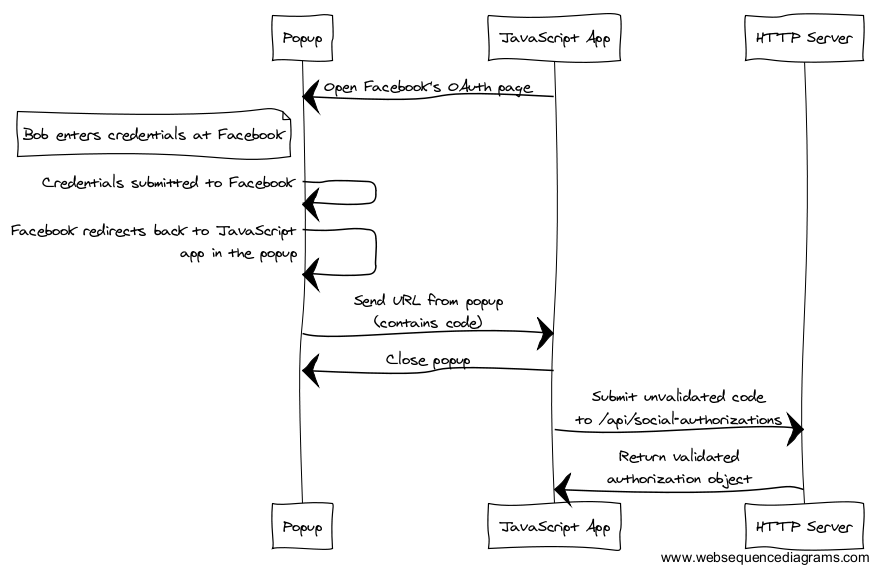 After submitting credentials to Facebook, the browser is redirected to a page that loads the JavaScript application. The application stalls while loading, and submits the URL containing the authorization code back to the parent window.

This is where Torii comes in. For Ember.js applications, we’ve given you a way to build and consume these flows easily.

Torii encourages you to work with composable, RESTful APIs by isolating authorization (through providers) from authentication (through adapters).

Providers in Torii are composable. They return authorization objects (often OAuth2 codes). Those objects could be passed to a connected account creation API, or to a session creation API. If you use the Torii session manager, they are passed to the adapter for your app, which can manage the exchange of authorization for a session object and/or current user.

Torii powers your JavaScript application’s session so that you only need to implement the exchange of an authorization object for a session object and current user. All the social authorization concerns stay out of your way.

Let me know how your API has solved the authentication challenge, and give Torii a look if your next project will be written in Ember.js.

Update: Some discussion at Hacker News